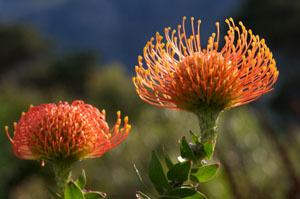 Protea flowers are commonly known as the sugar bush or rose spoon flower, while the King protea variety is recognised as the national flower of South Africa.

Description
Protea flower heads are dense and dramatic collections of rose-pink and multi-coloured florets that resemble artichokes. They vary in width between three and six inches. The flower grows from shrub-like stems typically ranging in length from one to five feet but sometimes as long as eight feet. Its blooms attract birds such as sunbirds and sugarbirds, which search for its nectar, as well as numerous insects and beetles.

Habitat
This plant is native to southern Africa and Australia. It grows best in places with hot summers and wet winters. Proteas do not grow much above altitudes of 300 feet.

Availability
Proteas can be grown from seed or cuttings in the autumn or the spring and the best method is to cultivate them in a greenhouse in large pots of acid-based compost. They will grow outdoors in a sheltered position and in full sunlight.

Species
Protea is a genus in the proteacae family. It is one of the oldest groups of flowering plants and dates back 300 million years, to the time of Gondwanaland; one of two large land masses that broke up to form the Earth’s present continents.

Care Tips
Proteas will not grow if there is too much phosphorous or potassium in the soil. Avoid fertilisers such as bone meal, chicken manure and use an ammonia-rich compound instead.

Did you know?
It was named after the Greek god, Proteus, who could change his shape, because its discoverer, Carl Linnaeus, found it to have many different forms within the species.