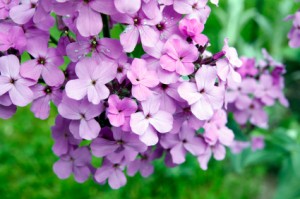 Phlox is a Greek word meaning ‘flame’ and was most likely named thusly due to its bright and vivid colours. Phlox originally came from North America and was available in England by the early 1800s. It quickly grew in popularity and today it is still found growing wild in gardens across the country.

Description
As a herbaceous perennial, Phlox flowers between summer and autumn and its flowers typically have five petals and leaves that are long and narrow. Some varieties are erect perennials whereas others are mat forming.

There are many different colours of Phlox available, although the most common are white, pink, mauve, lavender, blue, orange, red and purple. There are also two-tone phloxes, as well as a number with variegated foliage.

Habitat
Phlox prefer moist soil in either full or partial sun. They are generally hardy and require little attention in the garden, usually remaining dormant over winter. They are suitable to grow in Northern Europe and North America, as they prefer a cooler climate.

Species
The genus is phlox and there are 67 species of annuals and shrubs within this genus. The species P.paniculata is the tall garden plant and some popular varieties include Red Riding Hood, which produces rich cherry-red flowers between mid and late summer and Bright Eyes, which has pink flowers with a dark centre.

Care Tips
Many gardeners recommend moving phlox every five years or so, as they can take the nutrients from the soil quickly. When cut, they will require plenty of water and removing the leaves will help to maintain the flowers for longer.

Did You Know?
Two varieties of Phlox are named after famous painters; the ‘Rembrandt’ and the ‘Van Gogh’.