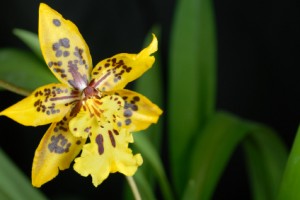 Oncidium is a variety of orchid which gets its name from the Greek word ‘onkos’ which means ‘swelling’. This is in reference to the protruding lower petal that defines most species within the genus.

Description
When in flower, Oncidiums typically have yellow and brown colours as well as rich, bright-green leaves. The petals often have ruffled edges and some varieties can grow up to a height of 5 metres.

Habitat
This orchid’s natural habitat is in warm countries, especially tropical parts of the Caribbean and the Americas. The hybrids have become adaptable with cultivation and as such will survive in more moderate conditions and lower temperatures.

Availability
Some varieties have green pseudobulbs, small flowers and a protruding lip, while others have much smaller pseudobulbs, spikier leaves and flowers differing in colour. The diversity of the species within the genus means that they can flower anywhere from early spring to mid-winter.

Species
Oncidium is a genus made up of around 330 species of orchids from the subtribe Oncidiinae of the vast and complex orchid family. At present there is some discussion as to the correct classification of species within the genus and is it being considered that it should be separated into smaller groups.

Care Tips
Oncidium is a cool-growing orchid which favours year-round low temperatures. It is well suited to a shady spot in summer and temperatures of at least 10 degrees Celsius are desirable at night.

The plant requires careful watering, with more moisture needed when new shoots are growing. Good drainage and ventilation are also essential. The soil can be allowed to go a little dry before water is added.

Did You Know?
The first flower of this genus to arrive in Europe was the Oncidium flexuosum which was brought over from in Brazil in 1818.