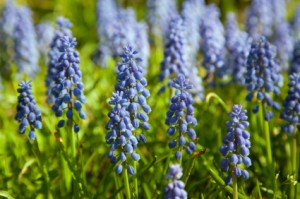 Muscari is a genus of perennial plants that produces distinctive bell-shaped flowers that hang downwards and resemble upturned grape bunches during springtime, which is why it is also known as the Grape Hyacinth.

Description
Muscari plants usually produce a blue or purple flower that, in warmer climates, can be present all year. They grow up to 30cm tall and some plants have a double flower. Most of the varieties of Muscari have a grape-shaped flower and some have flowers that are two tone in colour.

Habitat
The Muscari flower is native to the Mediterranean, the eastern Aegean region, Turkey and Morocco. They prefer to be in a partially shady to slightly sunny locations with a neutral soil and good drainage.

Availability
It blooms in the UK from March onwards and flowers can easily last for a month or longer. The Muscari bulbs are easily cultivated as they naturalise, or multiply, with ease. The longer you leave your bulbs in the ground, the more flowers and bulbs you will have the next year. It should be planted in autumn.

Species
There are believed to be around 40 species in the Muscari genus, which belongs to the Asparagaceae family and the Scilloideae subfamily. The Muscari genus was formally established by Scottish botanist Philip Miller in 1754, although Muscari has been cultivated in England since 1576.

Care Tips
Muscari are incredibly easy to care for. The plants like well-drained and neutral soil. The bulbs should be planted at a depth that is twice the height of the bulb itself.

Did You Know?
The name Muscari derives from the Latin word ‘muschos’ or ‘musk’, which refers to the fact that the flower has a strong scent.