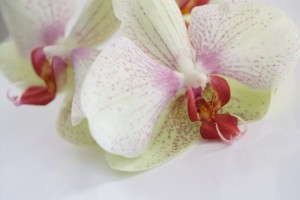 The word orchid comes from the Greek word for testicle – ‘orchis’ – and refers to the shape of the plant’s roots. Orchis is also a character from Greek mythology who was said to have brought about the creation of plants when he was turned into a flower by the gods.

Description
Orchid flowers are can be grown in an assortment of different colours, which is mostly due to the high number of hybrids that are available. All orchids are perennial herbs and grow in two specific patterns; Monopodial, where the stem grows from a single bud and leaves are added from the apex each year; and Sympodial, which means shoots emerge adjacent to each other on the stem, bloom and then stop growing, only to then be replaced by the next set.

Habitat
Orchids are found in every continent except for Antarctica. They are most widespread in tropical areas although some varieties have been found to grow wild in the UK.

Species
Orchidaceae is one of the largest plant families in the world, with approximately 25,000 species officially classified, with a further 100,000 hybrids that have been bred artificially.
The most common orchids grown in the UK are Slipper Orchids (Paphiopedilum), Moth Orchids (Phalaenopsis) and Boat Orchids (Cymbidium).

Care Tips
In general, orchids prefer bright light but not direct sunlight, humidity, good air circulation and a damp substrate such as moss or bark. They will last for two to three weeks if cut at the stem and longer when potted whole. Many orchids will wilt if kept too close to sources of  central heating and they should be misted regularly to keep them moist.

Did You Know?
Orchids were very popular in the 19th century and people would pay a lot of money to own one. The largest amount ever recorded was £1,500 paid for one orchid in 1890, which is the equivalent of around £96,500 today.

Confucius acknowledged the beauty of orchids in his writings, saying, “the association with a superior person is like entering a hall of orchids”.