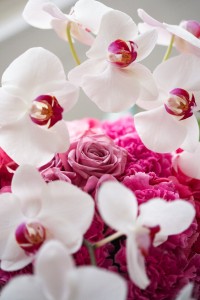 Introduced to the UK in the mid-1800s, Phalaenopsis orchids (pronounced fal-a-nop-sis) are now available in a variety of colours and are commonly known as Moth orchids, as their appearance is said to be similar to that of a flying moth. The name comes indeed from Greek phalaina meaning a moth and opsis meaning resemblance.

Description
Each flower spike can have up to 15 flowers on it and typically the flowers are flat and oval-shaped with a slightly waxy appearance. Flowers bloom in a selection of colours, including white, pink, yellow and purple and include plain, spotted and striped varieties.

Habitat
Phalaenopsis orchids grow wild in India and eastwards to northern Australia, including Indonesia and Java. They tend to grow on shady rocks and branches where the air is moist and warm.

Availability
Cultivated phalaenopses are available all year round but when growing wild, they will typically bloom between late winter and early spring.

Species
The genus is Phalaenopsis and there are many hybrids available, although these are often unnamed. Named species include P.equestris, which has small pink flowers and the P.cornu-cervi, which has small yellow flowers, spotted with dark red.

Care Tips
Orchids prefer a minimum temperature of around 20°C although adult plants are comfortable at around 15°c, with minimal draught. Too much light may cause the leaves to burn and too little light will prevent flowering. Leaves should be dust-free, as dust can block the light and compost should be loose to allow excess water to drain through.

Did You Know?
Phalaenopsis orchids should be kept away from fruit, vegetables and other flowers that may be wilting, as they are sensitive to the ethylene gas given off by these.