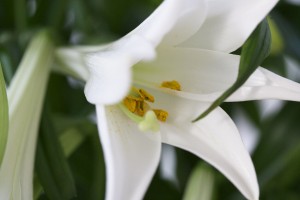 The genus Lilium belongs to the family of plants known as Liliaceae. True lilies belong to this genus and, despite their names, some species such as the Peace lily or Day lily are not true lilies, despite the ‘lily’ part of their name.

Description
True lilies have long, narrow leaves growing along the length of the stem and large, flamboyant flowers that are either single or in clusters. They grow from scaly bulbs. Many of the species are highly fragrant and typically range in height from 30cm − 120cm, although some can be much taller.

Availability
With so many different species of lily, the flowering time for these plants can vary. Varieties of the Lilium genus are widely available throughout the UK, at garden centres and stockists.

Species
Popular species include the fragrant white Lilium Candidum, or Madonna lily and the Easter lily (Lilium longiflorum), that originates in Taiwan and has clusters of trumpet-shaped flowers and shiny leaves.

Care Tips
Plant lilies in the garden in the early autumn when the bulbs are semi-dormant. Water and feed from early spring onwards through the growing season. If you’re growing a tall lily variety, be prepared to stake the stems to protect them from high winds. Lilies grown in pots still need shady roots, so if possible grow lilies in deep pots to allow room for roots to probe downwards. Doing best in loamy, porous soil with good drainage, different species within the genus vary on the amount of sunlight they need. Lilies generally like cool roots and sunny heads.