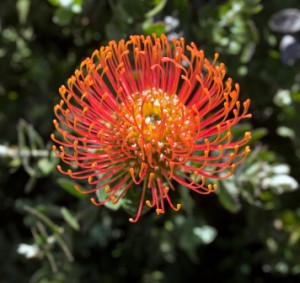 Commonly known as the pincushion due to its cluster of needle-like flower heads, Leucospermum is a shrub that produces flowers in orange and red. Leucospermum takes its name from the Greek words leukos and sperma, which mean white and seed respectively, a reference to the white seeds of many Leucospermum species.

Description
As its common name suggests, the flowers of the Leucospermum resemble a pincushion with a rounded head of springy hooks that curl upright. It is an evergreen shrub that grows to a height of between 0.5m and 5m. The leaves of the plant are tough and leathery and grow in spirals around the stem.

Habitat
The Leucospermum is native to South Africa and Zimbabwe, where they grow in a variety of different habitats including mountain slopes, forest and scrubland. When they flower their nectar attracts a variety of insects, which in turn attract a large number of insectivore birds, making it popular attraction wherever it is grown. These birds help the pollen transfer between the plants and are vital for them to reproduce.

Availability
Leucospermum is propagated by cuttings that are taken from November to March and then placed in a growing house until they are ready to be planted out. The flower heads appear from August to October. Leucospermum can be grown from seed but it is a fairly complicated process that involves a lot of preparation because the seeds need very specific conditions for germination, namely a smoke seed primer that contains substances that stimulates seed germination.

Species
Leucospermum comes from the Protea family and is a genus that contains around 50 different species. The common feature of members of this family is the inflorescences of small flowers that are densely packed into a compact head.

Care Tips
Leucospermum prefers milder climates and while it is a popular garden plant in South Africa, if it is grown somewhere colder it should be moved indoors over the winter months. It needs well-drained soil that has low levels of phosphates and nitrates and should be watered moderately to keep it looking at its best.

Did you know?
One particular species of Leucospermum, Leucospermum glabrum, was classed as endangered on the International Union for Conservation of Nature’s Red List of Threatened Species in 2007.