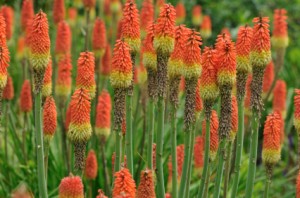 Kniphofia is commonly known as torch lily or red hot poker, although the species comes in a variety of colours such as yellow and cream. This plant often features in garden borders and in bouquets because of its striking flowers.

Description
Kniphofia is an evergreen plant with thin, grass-like leaves and an erect stem. It has a number of tubular flowers that make up a spike resembling a torch. The colouring becomes more intense towards the tip of the spike. The more common varieties are vibrant red and yellow, although subtler creams and greens are also available. The flowers themselves produce an abundance of nectar when in bloom, making them attractive to wildlife.

Habitat
Kniphofia are native to South Africa, although a number of varieties such as Bees’ Sunset and Little Maid are grown commercially. Kniphofia are resilient plants and should be grown in a sandy soil that is well drained. In their native South Africa, Kniphofia would receive plenty of rain to stimulate growth, but good drainage is essential, especially in winter as the flower enjoys very dry winters in South Africa.

Availability
Kniphofia flowers in late summer and autumn when planted in gardens. Cut flowers are usually available between May and October.

Species
There are over 70 species of kniphofia and they are an easy-to-grow and hardy garden plant. They are part of the Xanthorrhoeaceae family in the subfamily of Asphodeloideae.

Care Tips
It is best to plant them in full sun, although they can tolerate partial shade. Some thought should be given to their position in borders, as they can grow up to 1.2 metres tall and 0.6 metres wide. After the flowers have died, their spikes should be removed and mulch applied. The foliage should be cut back to the ground in spring in order to keep it fresh looking. With cut flowers it is important to protect the stems, as these can be damaged in transit. Lower flowers should be removed as they die off.

Did you know?
The first kniphofias to be discovered were thought to be plants from a closely related genus, namely Aloe. The first name given to what we now know as kniphofia was aloe uvaria.