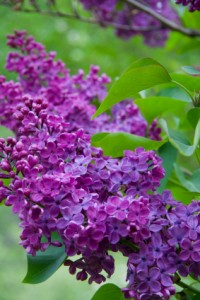 The Lilac is commonly known amongst florists as Syringa (sir-IN-ga), which is its genus name. It is a deciduous shrub that is often used in landscaping in the garden because it can be used to create a natural fence.

Description
Depending on the variety, Lilacs will grow from 2m to 10m in height. Their most distinctive feature is the mass of delicately-scented blossoms that are produced in the spring. Although each individual flower is small, they grow in clusters to produce an abundant display of blooms. Colours include white, pink and, of course, lilac.

Habitat
The Lilac is originally from the woodlands and scrublands of South East Asia and Southern Europe, although they are now grown in most areas that have a temperate climate.

Availability
The lilac is available from October to May and flowers in the spring, but if it is grown from seed, it can take years for the first flowers to blossom.

Species
The genus for Lilacs is Syringa and it is a member of the Olive, or Oleaceae, family which also contains plants such as Jasmine and Privet. There are between 20 and 25 different species of the plant, although various other cultivars and hybrids have been developed over the years.

Care Tips
The Lilac is a very hardy shrub and once established it needs very little maintenance, making it a popular choice for gardeners. They grow best in chalky clay soil but they will tolerate most soil conditions and prefer to have full sun if possible. In order to produce the maximum number of flowers, it is usually best not to prune them too much. If the plant is getting too big, then only prune once it has finished flowering to ensure abundant blooms the following year.

Lilacs can be propagated by taking cuttings from an established plant. Many professional growers will graft Lilac flowers in order to propagate them. However, this is a difficult procedure which requires plenty of time and knowledge in order to be successful.

Did you know?
Lilac is believed to signify first love and Westminster Abbey was decked out with Lilacs and other types of flowering shrubs, such as azaleas, for the wedding of Prince William and Kate Middleton in April 2011.

The most well-known grown Lilac is the pure white ‘Madamde Florent Stepman’, which was named after the wife of the first person to grow it.