Lily of the valley 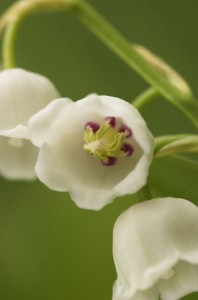 Convallaria majalis, or Lily of the Valley as it is commonly known, is an herbaceous perennial that is poisonous. It is believed to be the only species in the Convallaria genus and is also referred to as May lily, Lady’s Tears and Conval lily.

Description
Dark green leaves form a dense mat close to the soil, from which arching stems support small bell-shaped flowers, which are most commonly white or occasionally pink. With a heady, strong fragrance, the Lily of the Valley is popular not only for its scent but also for its ground-covering, spreading properties in shady conditions. It also produces small berries, which tend to be red or orange.

Habitat
Lily of the Valley is native to the northern hemisphere and certain varieties can be found in countries such as America, China and Japan. It likes a sheltered, moist habitat in either full or partial shade.

Availability
Convallaria majalis is sold in the spring as cut flowers and as a small potted plant. It can be planted from January to December and usually flowers between June and September. The seeds can be sown in containers or trays in a cold frame or greenhouse. Lily of the Valley can also be propagated by dividing mature plants in the autumn.

Species
Belonging to the Asparagaceae family and the Nolinoideae subfamily, this hardy plant has a rhizomatous root system, sending out horizontal shoots from its nodes.

Care Tips
Protect the plants from full sun as they prefer growing in the shade in a humus-rich soil that’s kept moist. Mature plants can reach a height of 23cm and spread 30cm, making them excellent for ground cover. They’re easily divided in the autumn months of September to November by digging up the clumps of plants and gently dividing the roots into smaller clumps.

Replant the divided sections in their new location at their original depth and with their shoots above ground. It will happily tolerate acid, neutral or alkaline soil and is ideal for use as ground cover in informal planting arrangements. It will willingly grow beneath other plants, such as roses or shrubs, adding interest to otherwise barren areas of the garden.

Did you know?
The Lily of the Valley flower supposedly symbolises the return of happiness, sweetness and a feeling of contentment.

Convallaria majalis is highly toxic to both humans and animals if it is eaten.

The Lily of the Valley has been the national flower of Finland since the late 1960s and used to be the floral emblem of the old Yugoslavia, which was dissolved in 1992.