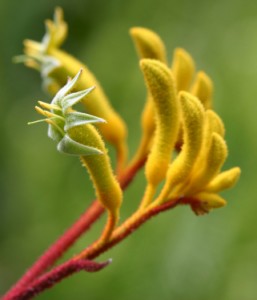 The genus of Anigozanthus was first named by Jacques Labillardière, who was a French naturalist working in the 18th and 19th centuries. Anigozanthos flavidus, commonly known as the Red and Green Kangaroo Paw, is the most recognisable variety and gets its name from its claw-shaped blooms.

Description
The plant has striking, paw-like red and green flowers that have a fuzzy appearance and grow on tall stalks. The stalks can grow to about three feet in height and although the velvety flowers are brightly coloured, they have no fragrance.

Habitat
The natural habitat for Anigozanthus is in woodland areas of southern Western Australia. They can tolerate a large range of temperatures between 0 degrees and 40 degrees C. They are very adaptable to different climatic conditions and can be cultivated well in southern Europe.

Availability
Anigozanthos is available in the commercial cut flower market in cut stems during the summer months of the northern or southern hemisphere. It is not a very well known flower in Britain, but has become more established as a pot plant.

Species
Anigozanthos is a perennial herbaceous plant and a genus of the Australian Bloodwort family, Haemodoraceae.

Care Tips
A sunny location is the best position for plants, together with a well-composted and well-drained soil. They can be grown from seed. In Britain, Anigozanthus is usually a greenhouse or conservatory plant. It’s best to divide clumps of plants every several years to ensure strong growth. When grown in colder climates, Anigozanthus is prone to a fungal disease, which appears as black blotches on leaves. Remove the leaves and burn them. A fungicide such as copper oxychloride could help in extreme cases. As long as the leaves are removed, the plant will thrive.

Did You Know?
The origin of the name, Anigozanthos comes from the Greek. “Aninese” means unequal and “anthos” means flower. The combination alludes to an uneven shaped flower.

Be aware that these flowers can irritate human skin.