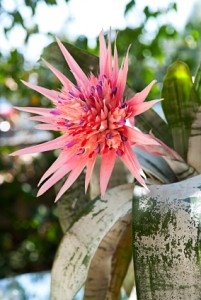 Aechmea fasciata is also known as the ‘urn plant’ or ‘silver vase’ due its silver foliage and the similarity in shape between its leaves and a vase.
It was introduced to Britain in 1828 and is now popular as a houseplant due to its visual appeal and longevity when in bloom. Aechmeas are epiphytic, which means that in the wild they grow on other plants – usually trees – but are not parasitic upon them.

Description
The leaves of this large plant form into the shape of a rosette. It is a slow grower but eventually reaches up to three feet in height, with a width of approximately two feet. The leaves are anything from 18 to 36 inches long and it has a pink flower head that will last for up to six months when it blooms.

Habitat
The natural habitat of Aechmea fasciata is Brazil, where it can be found growing on trees in mountain forests at about 1,800 feet above sea level. It can also be grown in its natural state by attaching it to a piece of bark with some moss around its roots.

Availability
Aechmea fasciata is widely available throughout the year. It is, however, fairly easy to propagate. After flowering, it produces side shoots (called pups or offsets) that can be removed and used to grow additional plants.

Species
The genus Aechmea, which is a member of the Bromeliaceae family, has about 150 species, although only four of these are commonly found as houseplants.

Care Tips
These plants need good air circulation, soil that drains easily and constant humidity. They should be watered using filtered water or rainwater. However, in the winter months it’s best to keep them fairly dry. Humidity levels, though, should be maintained with regular mistings. The plant can be successfully cultivated indoors. It needs reasonably bright light but should be kept out of direct sunlight. It should be planted in well-drained soil that shouldn’t be allowed to dry out too much.

Did You Know?
The plant can purify the air by removing formaldehyde from it.