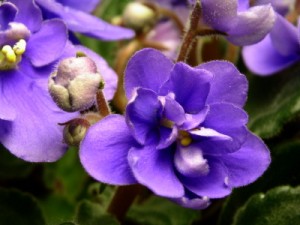 African violet is the common name for the plant known as Saintpaulia. It was officially discovered by Baron Walter von Saint Paul Illaire, who came across the plant in Tanzania and sent some seeds home to his father, who was an amateur botanist. Although two British botanists had discovered it previously and had attempted to have it recognised by Kew Gardens, sadly the condition of the plants was not good enough to allow for a scientific classification.

Description
A perennial, herbaceous flowering plant more commonly kept as a houseplant, the African violet comes in a variety of shades of violet, although it can grow white in the wild. It has fleshy leaves with a fine, hair-like fur on them. The flowers themselves have five petals and are velvety to the touch. It was given its common name because of its resemblance to a traditional violet.

Habitat
African violets are native to Tanzania and Kenya, favouring a tropical climate. Essentially, it thrives in typical rainforest conditions – hot and moist, yet well-drained and deeply shaded. It likes an acidic soil and is found growing in small packets of soil caught between rocks, or on the shaded sides of a stream.

Availability
This plant is widely available and can be grown from seed as well as from cuttings.

Species
Saintpaulia is a genus of the Gesneriaceae family. There are around 20 recognised species in this genus.

Care Tips
It needs a lot of light, but not direct sunlight. It should be kept moist but not waterlogged and prefers a shallow pot to a traditionally deep plant pot. For a better chance of success with this plant, you can invest in some soil specially prepared for African violets.

Did You Know?
It is believed that the only place that the African violet grows wild now is the Amani Nature reserve in Tanzania.