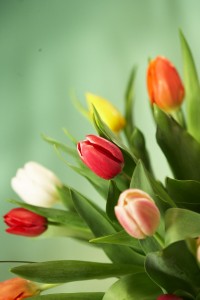 Associations with the song ‘Tulips from Amsterdam’ often connect this flower to the Netherlands. However, the flower and its 109 different species can be traced back to the Ottoman Empire.

The Turks knew the tulip as Lale, but the modern name is thought to come from the Turkish word ‘tülbend’ meaning ‘muslin’ or ‘gauze’. This word has its origins in the Persian word ‘dulband’ meaning ’round’ and is believed to be a reference to the tulip’s similarity in shape to a turban.

Description
Tulips grow as a single stem and flower for each plant, with 2 to 6 leaves (although less common varieties can have 12) which are long, thin and green. The flowers, which come in many colours have 6 ‘tepals’ which comprise 3 petals and 3 sepals. Each plant can vary in height ranging from 10cm to 71cm depending on the species.

Habitat
Tulips grow naturally across Europe and Asia. They are a regular feature in gardens all over the world and are particularly prevalent in British gardens.

Availability
Tulips are easy to propagate and are readily available to buy in the UK as bulbs or cut flowers. In Victorian times, red tulips were seen as a way to declare one’s love, which has lead them to become a popular choice for Valentine’s Day.

Species
The tulip is part of the Lily Liliaceae family and is of the genus Tulipa. With 109 species readily available, each has a common name to help differentiate between them.

Care Tips
When planted, tulips need free-draining soil and space. They can survive in the UK’s mild climate and won’t need too much extra care.

Tulips will carry on growing in water and will bend toward the light. They will last for just over a week in a vase and it is wise to buy the flowers when they are in bud and have their colour showing.

Did You Know?
The botanist Carolus Clusius, under the employment of the Roman emperor Ferdinand I, brought tulips to Holland from Turkey when he was appointed the professor of Botany at Leiden University.