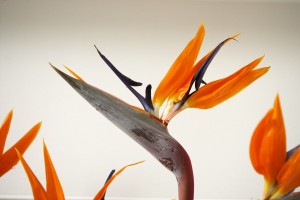 The evergreen Strelitzia is commonly known as the Bird of Paradise plant. This is due to the bright colours and pointed petals of its flowers, which resemble a native bird species.

Description
Its silvery-green leaves are large, between 30 to 200 centimetres long, 10 to 80 centimetres broad and similar in shape to a banana leaf. The arrow-like orange flowers have three erect white petals as well as other deep-blue, almost purple ones. The flowers of the Strelitzia are pollinated by bees and sunbirds, which are attracted by the nectar.

Habitat
The Strelitzia is native to South Africa but is also found in Swaziland and the Eastern Highlands of Zimbabwe. It grows well in cool, moist mountainous forests rich in leaf litter.

Availability
The Strelitzia can flower throughout the year and is propagated by division of the underground rhizome during repotting. It can also be grown from seed. After germination, plant the seedlings in well-drained soil and accustom them to full sunlight gradually.

Species
There are five species and a hybrid within the genus. They are Strelitzia Alba, the Caudata or Mountain Strelitzia, the Nicolai or Wild Banana, the Reginae or Crane Lily, the Juncea or African Desert Banana and the hybrid of the Reginae and Augusta, the Kewensis.

Care Tips
Strelitzias grow well in bright light and even some direct sunlight, but need to be fully settled to flourish in direct sunlight. Remove any wilted crests regularly and new ones will appear from inside the beak-shaped flowers. Make sure the plants have plenty of water, warmth and food. Indoor specimens sometimes grow very large and need to be repotted every spring and broken up into smaller plants.