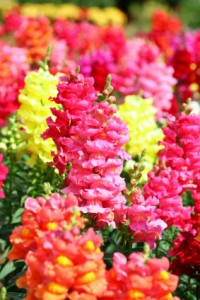 The Snapdragon’s botanical name is Antirrhinum, from the Greek words ‘anti’ (like) and ‘rhin’ (a nose), which refers to the resemblance the flower is said to have to a snout.

Description
Snapdragons come in a wide variety of bright colours and a range of heights, from dwarf to medium and tall. They are commonly found in English hedgerow borders, with a single plant producing seven or eight spikes of blossom in a season. Regular deadheading helps them bloom again and again throughout the summer.

Availability
Snapdragons are perennials that flower for most of the year and their peak season is April – June and August – October. Sow the seeds indoors early in the year, moving the seedlings outside once the ground is frost free. It is advised to plant 6 to 12 inches (15 to 30 cm) apart depending on the size of the variety.

Habitat
This flower originated in the Mediterranean area but now thrives in the UK when planted in well-fertilised soil in full sun.

Species
Snapdragons used to be treated as part of the Scrophulariaceae family but DNA sequences now include them under the umbrella of the much larger Plantaginaceae species.

Care Tips
They should be planted in well-drained soil as their roots are prone to rotting. They also react to ethylene gas, so keep them away from ripe fruit and vegetables, flowers that are dying and too much heat. To promote the flowering of upper buds and prevent wilting stems, the top 5 to 8cm of the stem should be cut.

Any wilted flower heads can also be removed, although some people feel that this spoils the appearance of the flower. However, it does force the plants to produce additional stems that will bloom later in the season.

Did You Know?
The English name derives from the flower’s imagined appearance as a dragon’s face. The variety is much loved by children, who delight in gently squeezing the sides of the flower to see the ‘dragon’s mouth’ open and close or ‘snap’ shut.