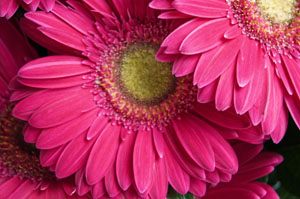 Gerbera, also known as the African daisy, Transvaal daisy, or Hilton daisy. It is a flowering perennial plant related to the sunflower and attracts birds, bees and butterflies. It is also often used as an ornamental plant when deer are a problem, as they will not eat it.

Description
The stems grow from a basal clump of dark-green leathery leaves to about 18 inches, or sometime even 30 inches, in height. The blooms are four inches across and resemble large daisies. They come in red, orange, yellow, pink, white and cream colours and can continue flowering for six months.

Habitat
Gerbera are native to South Africa and are also found in the wild in Madagascar and Asia. They grow on grasslands, rocky slopes, the veldt and in sandy soils. They thrive in full sun or partial shade in tropical, subtropical and temperate climates and are very tolerant of infertile soils but do not like temperatures below about 7 degrees C.

Species
Gerbera belongs to the Compositae /Asteraceae genus, one of the largest plant families. There are about 30 to 40 species of Gerbera. Commercial breeding started in the 19th century when the Gerbera jamesonii species from Natal in South Africa was crossed with Gerbera viridifolia from the Cape Province. It was cultivated first in Europe and later planted in the Himalayan foothills in Kashmir at heights between 1,300 and 3,200 metres.

Care Tips
Gerbera needs a well-drained soil in a sunny spot in the garden. It responds well to a standard fertiliser. Prolong the blooms outdoors by dead-heading.

In pots indoors, it is best grown in an equal mixture of peat, compost and sand. It is prone to aphids, so use a pesticide outdoors and indoors and wash the leaves with mild soapy water once a month to keep pests away.

Did You Know?
The name comes from a 19th-century German naturalist, Traugott Gerber, who was a close friend of the Swedish botanist Carl Linnaeus