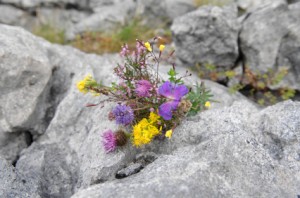 Ireland is often pictured as a lush, green land with fields, trees and woodlands stretching to the four corners of the country. It’s rich and varied landscape makes it a perfect place for wildflowers to grow and many species native to Ireland are now the subject of much research and scientific interest.

The Lusitanian Flora is a group of 15 plants and flowers that are exclusive to Ireland, having been transported there from the Iberian Peninsula (Spain and Portugal) decades ago. These species have now evolved their own distinctive characteristics for the climate they inhabit and are not found growing anywhere else. Examples include the Maidenhair Fern, Irish Fleabane and Large-flowered Butterwort and although the group has been the focus of much study, it is still unknown how the plants first came to Ireland.

Ireland’s mild climates and rich soil lends itself to thriving wildflower populations and its varied environments each have their own particular types of flowers and plants growing there. The peat bogs provide Ireland with some distinctive and varied wildflower species, such as Bog Cotton and Ling Heather, while its limestone-rich soil areas such as The Burren are home to fuchsia and Bloody Cranesbill.

Conservation efforts have been under way for the past few years to protect these flowers and plants from decline and loss of habitat. The Botanic Gardens has created an Irish Threatened Plant Species Conservation Programme in order to monitor and catalogue the populations, spread and threats facing wildflower species in Ireland.

Interflora flowers Ireland allows you to send bouquets and arrangements with ease, presenting your loved one with beautiful natural flowers from sustainable sources. Leave the wildflowers in the fields and choose your floral gifts from Interflora to send a wonderful present and keep a clear conscience.