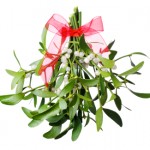 Did you know that mistletoe is not a plant in the normal sense but is in fact a parasite? It requires a host tree in order to survive and relies on birds to spread their seeds to new trees.

The mistletoe has featured in a number of stories dating back hundreds of years, from the 13th century Prose Edda from Norse mythology to stories from the Ancient Celts, but the origins of its name are unknown to this day. The Druids believed that mistletoe was a symbol of good health and luck and would decorate their headdresses and staffs with the plant during their Yuletide festivities

As far back at the 16th century, kissing under the mistletoe has been depicted in festive artwork and stories, although how this tradition was originally founded is still unclear. In the 18th century, mistletoe became more popular as a Christmas decoration and many people began using it in earnest around doorframes and on fireplaces. In line with an old custom, mistletoe should not touch the ground once it is cut from the tree as this will bring bad luck for the next year.

European mistletoe is the variety seen most in the UK, with rich green leaves and soft white berries. These berries are poisonous if eaten and can cause stomach upsets, so care should be taken around children and small animals when used as a decoration.

Every year, Tenbury Wells hosts the Mistletoe Festival which celebrates the popularity of this unique plant. In fact, the first Saturday in November is National Mistletoe Day and signifies the start of the festival. Tenbury Wells produces the UK’s biggest supply of mistletoe for Christmas and exports the plant across the world in time for the festive period.