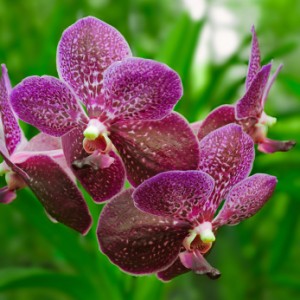 The name Vanda comes from the Urdu name for one of the species, Vanda tessellatta, which has now been adopted as a common name for the whole genus.

Description
Orchids in the Vanda genus usually display five-petal flowers. Flowers can vary in colour and often come in bright shades such as purple, pink and yellow and many have spots adorning the petals. Size can vary from species to species, from small and compact up to many metres. The flowers are prized for lasting a long time – up to six weeks – and can bloom every few months.

Habitat
The Vanda genus originates from southern and eastern Asia. Species originate from China to the north as far south as Australia and everywhere in between, including India, Vietnam and the Philippines. They originally come from tropical climates and therefore like to be kept warm, but also appreciate cool air and plenty of humidity.

Availability
Propagation is difficult and usually reserved for experienced growers. Although it can be achieved by growing seeds, the other option is by cutting the top part of the plant and potting.

Species
The Vanda genus is one of 880 genera of the orchid family, known as Orchidaceae. Of the 50 or so species of Vanda, as well as many hybrid species, the Vanda sanderiana and the Vandopsis lissochiloides are most popular amongst growers.

Care Tips
Vanda have aerial roots which need space and to be left alone. The plant does not like to be disrupted and this may cause the flowers not to bloom. Vanda orchids enjoy regular misting and cool air, although they prefer warm rooms and cannot stand cold winters. The orchids are sensitive to ethylene gas, so it’s wise to avoid storing dying flowers, fruit or vegetables near to them. To encourage new growth, it’s best to snip off the old flower heads.

Did You Know?
Considered one of the most highly evolved of all orchids, Vanda are prized by horticulturalists and are often grown for competitions.