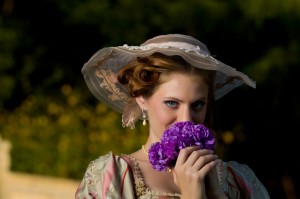 In the 17th century, the court of the Ottoman Empire developed a way of communicating using flowers to represent different meanings. In a time when not everyone could read or write, this became a helpful way of passing messages to one another without the need for writing.

The Victorian era saw a resurgence of the idea with a number of books published on the subject from various authors, including French writer Charlotte de Latour who wrote Le Langage des Fleurs (The Language of Flowers) in 1819.

Victorian women especially picked up the silent language that allowed them to communicate feelings and meanings that the strict propriety of the era would not allow. Sending a small posy of flowers, or a ‘tussy mussy’ as they were also known, or wearing them as fashion accessories, allowed young women to communicate with suitors without saying a word.

In today’s modern society, flowers have taken on a more universal symbolism and many varieties are closely associated with certain occasions. Red roses are typically given to lovers on Valentine’s Day, while pink carnations and chrysanthemums are often associated with Mothering Sunday. The art of floriography is now used in a less direct but equally meaningful way and, by experimenting with different colours and types of flower, you can create a personalised message that conveys any sentiment you wish to express.

Here are just a few of the most common meanings associated with the UK’s favourite flowers: